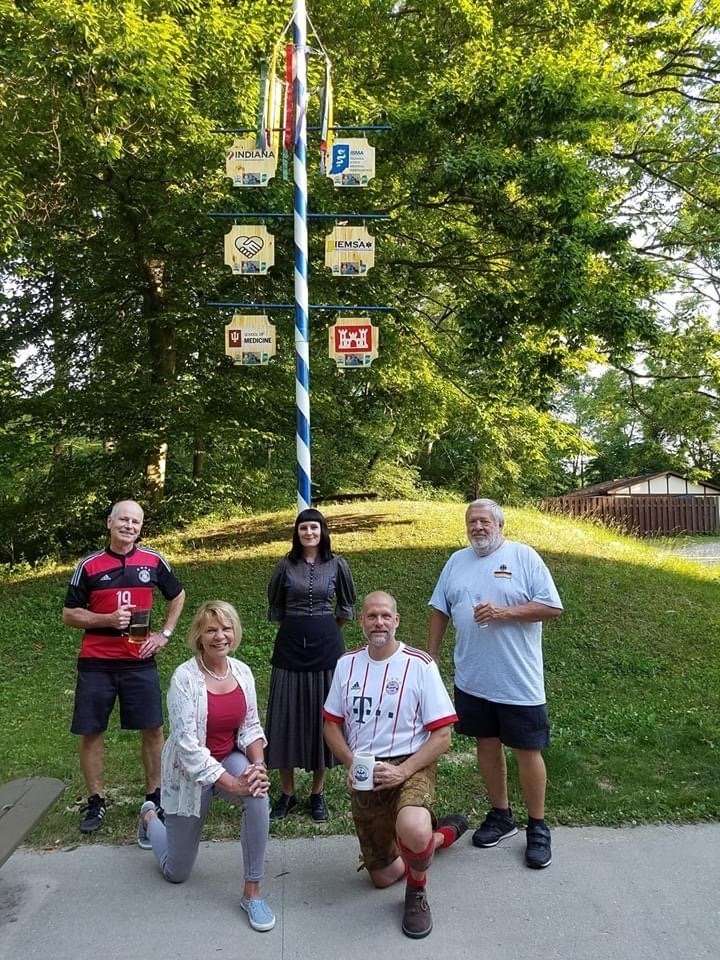 For many of us in the German American world, the arrival of September is a special time. However, while pumpkins and autumn foliage make for a striking scene in the backdrop of our lives, as you might imagine, there is something more that we #IndianaGermans wait for, as every summer draws to its close. Of course, we’re talking about the arrival of the Oktoberfest biers! It is a truly delicious time of year, as some of Germany’s most famous libations arrive to America’s shores. Today, many of our local microbreweries also make their own renditions of these time-honored brews.

In America, tradition has developed an idea of what an Oktoberfest bier is. Often, we associate Oktoberfest with a type of amber lagers, called a Märzen. These lagers are in the Vienna lager super family of biers, and they are characterized by malty and toasted flavor. If made properly, they are very clean, toasty, malty, and with minimal hop character. For years, the GAK’s famous Oktoberfest has been serving examples of this traditional style. In modern times, some Oktoberfest biers have taken upon a much lighter color, like a traditional lager. These biers are called festbiers, and they are the more common biers served at the Munich Oktoberfest today. What is the story of these biers, and how have they changed over the years?

By now most of you are aware that the original Oktoberfest in Munich began with the marriage celebration of Bavarian Crown Prince (later König) Ludwig I and Princess Therese of Saxony, on 12 Oktober, 1810. This was a whole town celebration, and just like today, excellent food and bier were foundational to the celebration. The biers of the era, and featured at Ludwig and Therese’s feast, were what might be today called “dunkels”, or dark lagers. Dunkels were the biers of the day, as the drying kiln for malts were not yet in use, making the lighter helles beers impossible to make. The older, more direct heat method of drying malt simply made the biers dark.

Dunkels would remain the bier of Oktoberfest long after the lighter pils and helles biers came to into fashion in Germany, as a historical preference in deference to Ludwig. This changed in 1872 when Josef Sedlmayr introduced an amber, Vienna-style lager to Oktoberfest after a mob drank his dunkel (Spaten). Many of the Vienna styles in Germany had taken the name of märzen, as in tradition, these biers were brewed in the month of März (March), were lagered in caverns under the biergartens of breweries throughout the warm summer, and were ready for drinking in September and Oktober. Märzen served as THE Oktoberfest bier throughout the world for over a century going forward, and still today is enjoyed as “Oktoberfest” bier. They are the most common Oktoberfest biers made by American craft brewers.

In the 1970s, Paulaner introduced a new style of bier to the Oktoberfest world: the “Fest” bier. Their product was named “Wiesn festbier”, named after the Theresewiesn, or “Therese’s Meadow”—the very field where the Oktoberfest in Munich is held.  Note, that the word “wiesn”, with an “ie” is not the same as Weiss (with an “ei”) which refers to the wheat biers (hefeweizen, or weissbier). This can be confusing, but the word “festbier” is the key term that identifies the style. This bier is light in color, like a helles bier, but its body is richer and maltier, and correspondingly, its alcohol content is a touch higher than a typical helles. Paulaner’s goal in introducing the festbier was to blend the malty and richer style with a brighter bier that would promote increased consumption, as the Märzen’s roast was enjoyed more as a “sipping” bier.

As of the late 1990s, festbier examples are made and sold by all six breweries at Oktoberfest in Munich, and Paulaner, Löwenbrau, and Hofbrau versions are available for purchase in the USA. Today, the festbier is the bestselling bier at Munich’s Oktoberfest.

Your Klub has been able to secure a supply of the heavily-guarded Paulaner Wiesn Oktoberfestbier for sale. This is due to our outreach to the Paulaner brewery and their sponsorship of our Oktoberfest event last year, and hopefully future years. Paulaner significantly restricts the sale of this product outside of Munich, and we are grateful to have our supply, as we are one of the few places in the area to be able to sell it. We will also have the premium amber ur-Märzen from Ayinger Brewery, as one of the world’s finest example of the traditional style. Ayinger is one of the world’s most decorated and esteemed breweries, located in the countryside about 70 Km to the southeast of Munich.

As we prepare to continue our spring cultural and event calendar, we are faced with unprecedented challenges related to COVID-19. This coronavirus outbreak has impacted everyone in the service and events industry as many events and meetings have had to be cancelled.

The safety and well-being of our members and guests is our highest priority at the German American Klub as we consider the future KulturAbends and spring event schedule. We assure the membership that we will do everything possible both to provide the membership experience that you expect and deserve, but also to ensure a safe operating environment at our Edelweiss Restaurant, Biergarten, and Ballroom. Therefore information provided by public officials, healthcare professionals and industry experts will be guiding our decisions on holding or postponing our events and presentations in the coming weeks.

Thank you again for your ongoing support of the GAK and the German-American culture of Central Indiana, and your continued on-line engagement with us during this dynamic time. We’ll keep you posted ASAP on any changes to our schedule.”