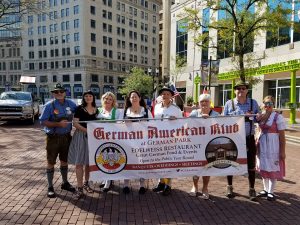 The German American Klub of Indianapolis participates in many cultural events throughout the year.

“The Germany the “Forty-Eighters” Left Behind: Roots of Mid-Nineteenth Century German Emigration”.  Presented by David Jackson.

Have you ever wondered why your ancestors came to the USA in the mid-1800s? Most of Indiana’s German immigration occurred in  the decade of the 1850s, in the aftermath of the infamous “Revolutions” of 1848. During this decade, 1.5 million Germans immigrated to the USA, and many ended up in Indiana, and are known as the “Forty-Eighters”. GAK member and historian David Jackson has been studying the events in Europe that led up to this mass emigration as his primary research interest for his academic career.

GAK and IGHS together discuss the early German-Hoosiers, from the early days of the “federation” to the modern day.

Once the Early German Hoosiers settled in the Midwest, they formed critical communities where they could secure work, set up German language schools, provide food for their communities, enjoy social activities. Those that settled in the Indianapolis area were no different. The Federation of German Societies is a prime example of this, and still exists to this day here on Indy’s south side. NOTE: this is a WEDNESDAY evening, and is a joint meeting with the Indiana German Heritage Society.